DAH Theater was founded by directors Dijana Milošević and Jadranka Anđelić in 1991, out of the need to experiment and research further in their theater work. From the very beginning, they have been joined by actress Maja Mitić, and during the years, a large number of permanent and occasional associates have joined the DAH Theater. In 1993, the DAH Theater grew into the DAH Theater Research Center, and in 2017 it became the DAH Theater International. 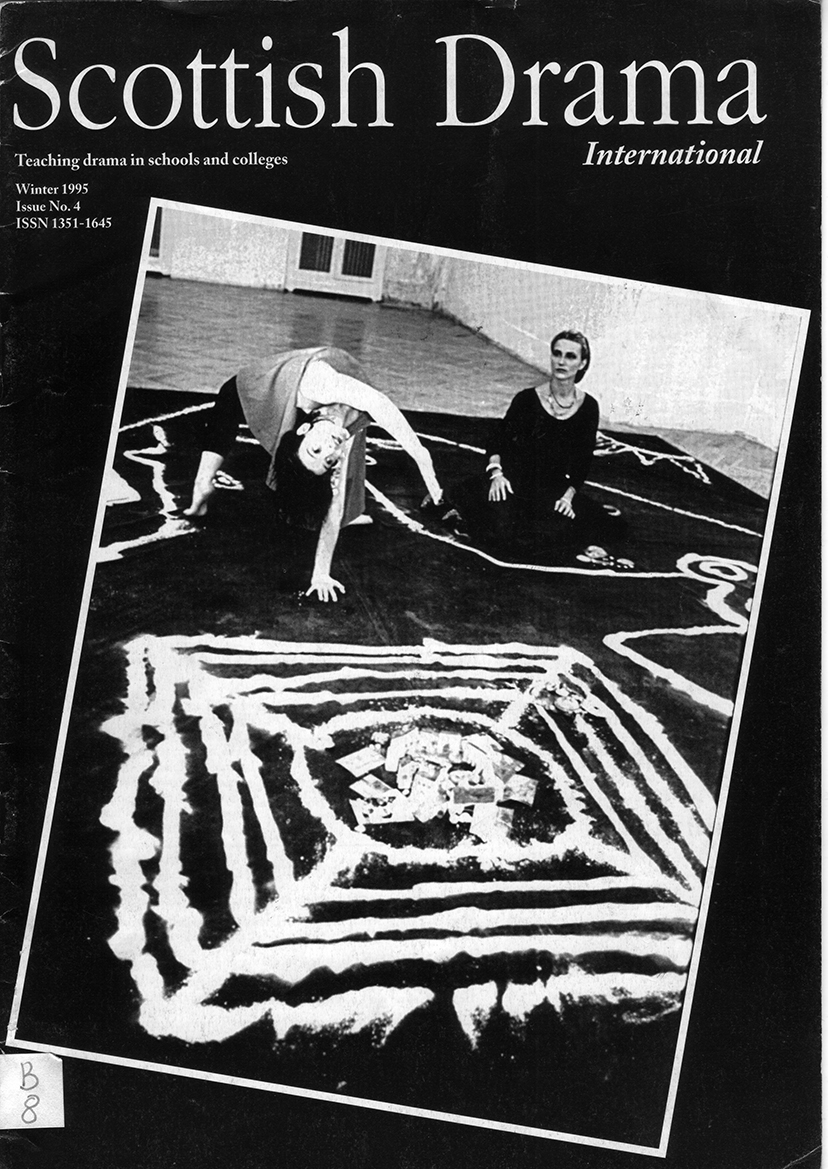 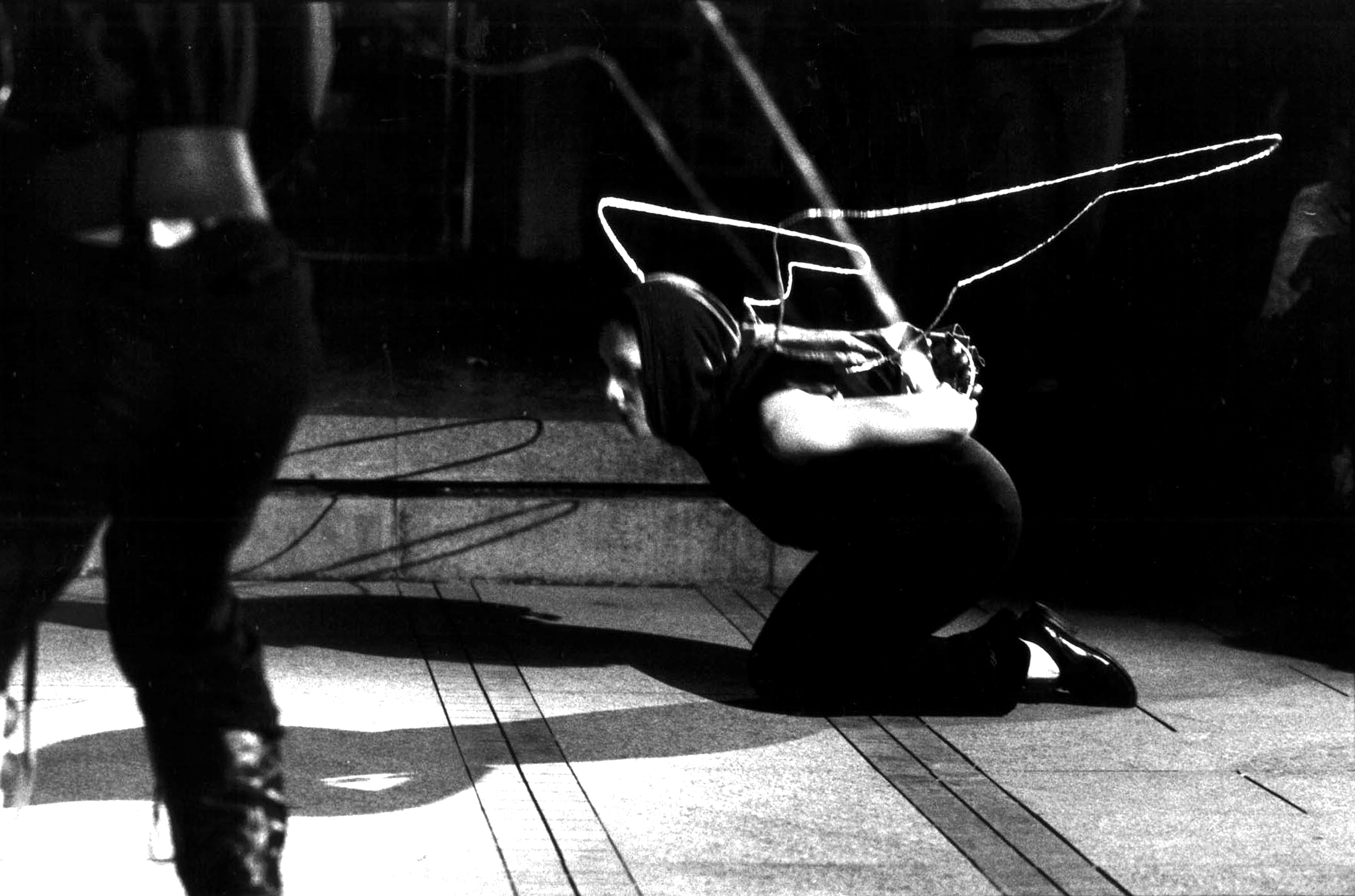 The great theater masters said that the first steps of a theater group determine its destiny. The first play certainly determined the fate of the DAH Theater, shaping the main postulates of its work. The themes through which DAH Theater expresses its poetics remain related to the relationship between the individual and society, and the role of the artist in dark times.

When the war in Yugoslavia began in 1991, DAH Theater faced the essential questions: “What is the responsibility and duty of artists in dark times, in times of violence and human suffering? ” In search of answers, the group interrupted work on their current project “Gifts of our Ancestors” and dedicates itself to the preparation of a new play. The play, “This Babylonian Confusion”, based on songs by Bertolt Brecht, was the first performance of the DAH Theater- an anti-war play performed by DAH Theater in an open space in the center of Belgrade, at a time when war was not allowed to be mentioned.

“The beginning of the work of DAH Theater, its cry for creation, chronologically coincided with the disintegration of the former Yugoslavia and the general destruction that followed. Theater directors Jadranka Andjelic and Diana Milosevic, together with actress Maja Mitic, decided to oppose destruction with creation, to create a living theatrical microcosm in a disintegrating world. “

THE NEW YORK TIMES ARTICLE ABOUT THE WORK AND POETIC OF DAH THEATRE, July 2001 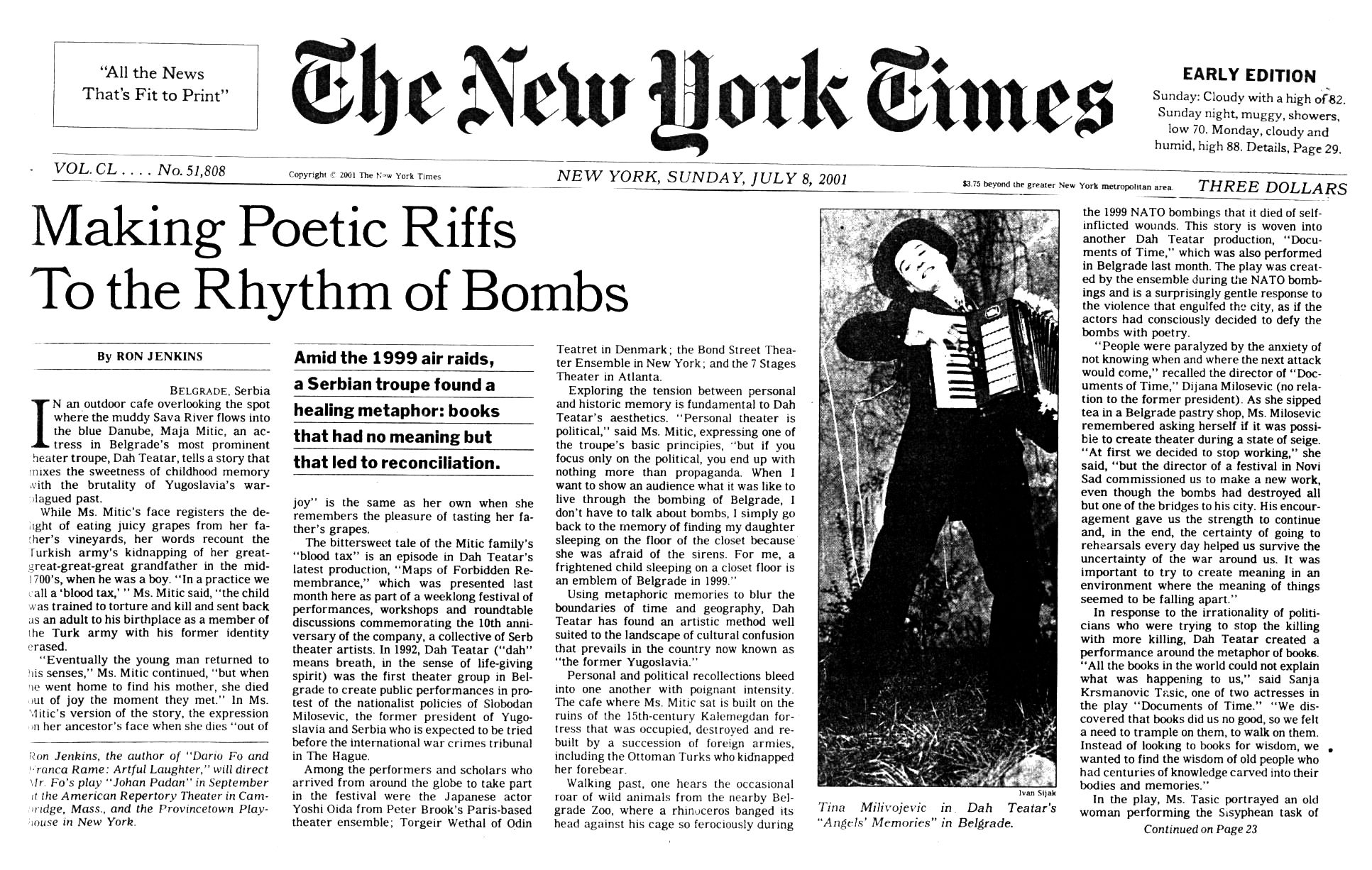 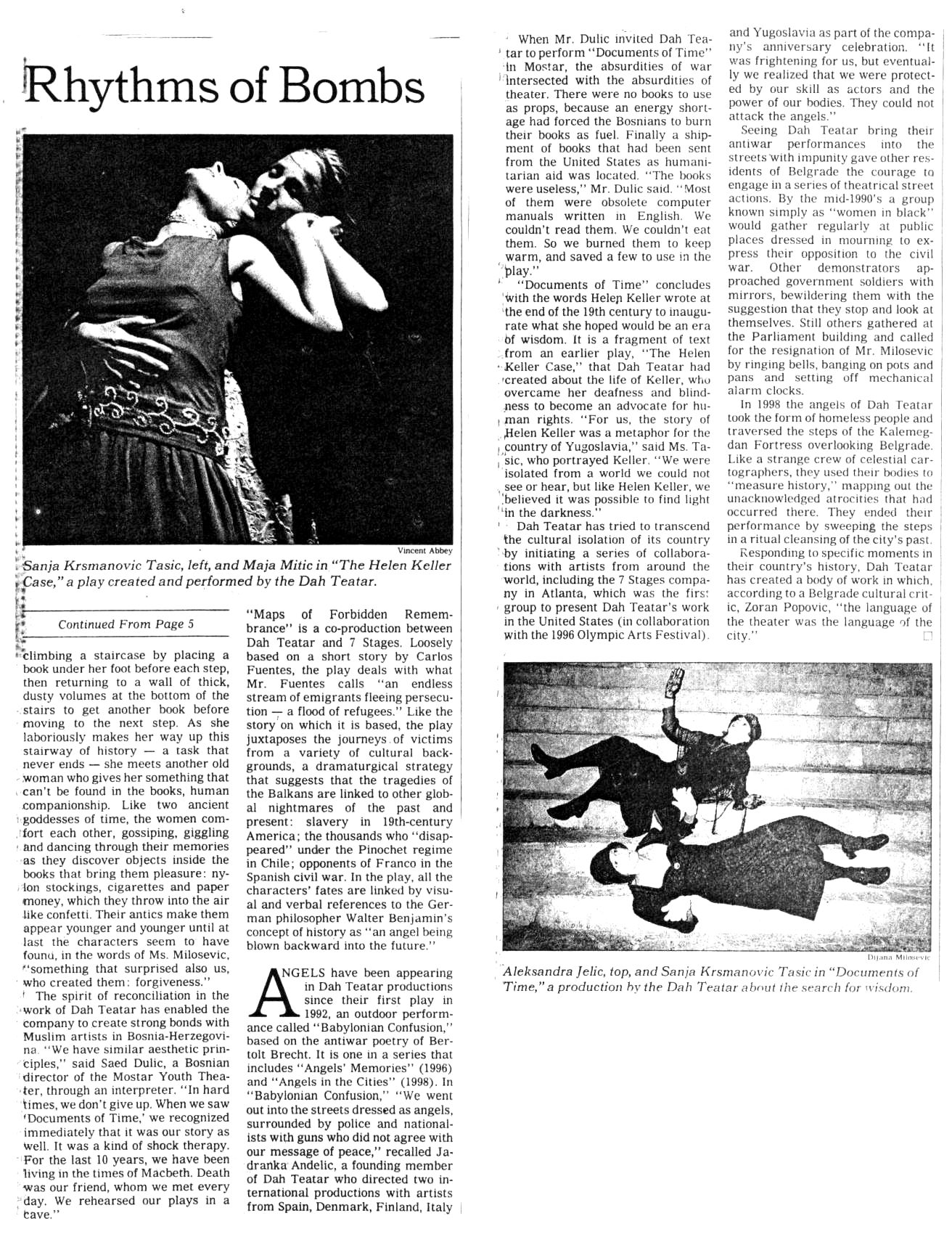 The book about DAH Theatre

In 2016, DAH Theater celebrated its 25th anniversary as the first book on DAH Theater was published – “DAH Theater – A Sourcebook” published by Lexington Books, edited by Dennis Barnett, professor of drama and literature at Coe College, Iowa [USA]. In the book, eminent artists from all over the world as well as natives from Serbia contributed texts about the DAH Theater; with a foreword written by Eugenio Barba, the famous director and founder of the Odin Theater.

Dennis Barnett has assembled a most informed and engaging sourcebook on DAH Theatre, one of the world’s definitive companies working in social conflict contexts. A work of great breadth that offers a meaningful and enjoying read to the historian, the scholar and the practitioner, while ultimately managing to paint the rich portrait of a living theater and of the people and societal circumstances that breathe life into it. This is a necessary and revelatory book.  –Roberto Gutiérrez Varea, University of San Francisco

About the book and other publications 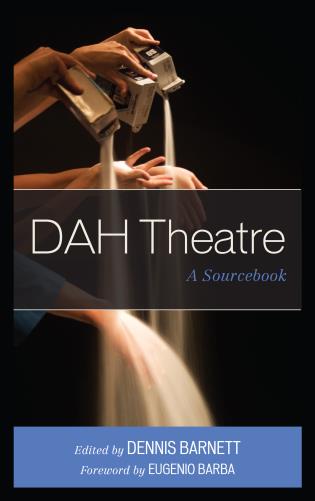 All the while, DAH Theater has been touring throughout Europe, the USA, Australia, New Zealand, and Serbia. As Theatre Research Center is open to collaboration with various organizations and associations (informal initiatives, networks, associations of women’s initiatives, peace organizations, groups with special needs, minority groups) that can implement their programs in cooperation with us.

INTERNATIONAL PROJECTS
FESTIVALS AND MEETINGS
INSIDE THE LABORATORY 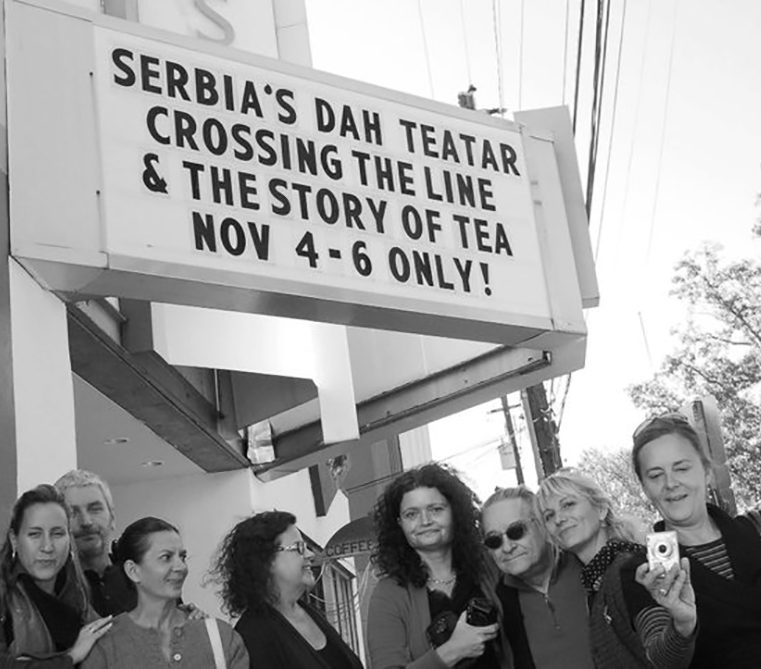 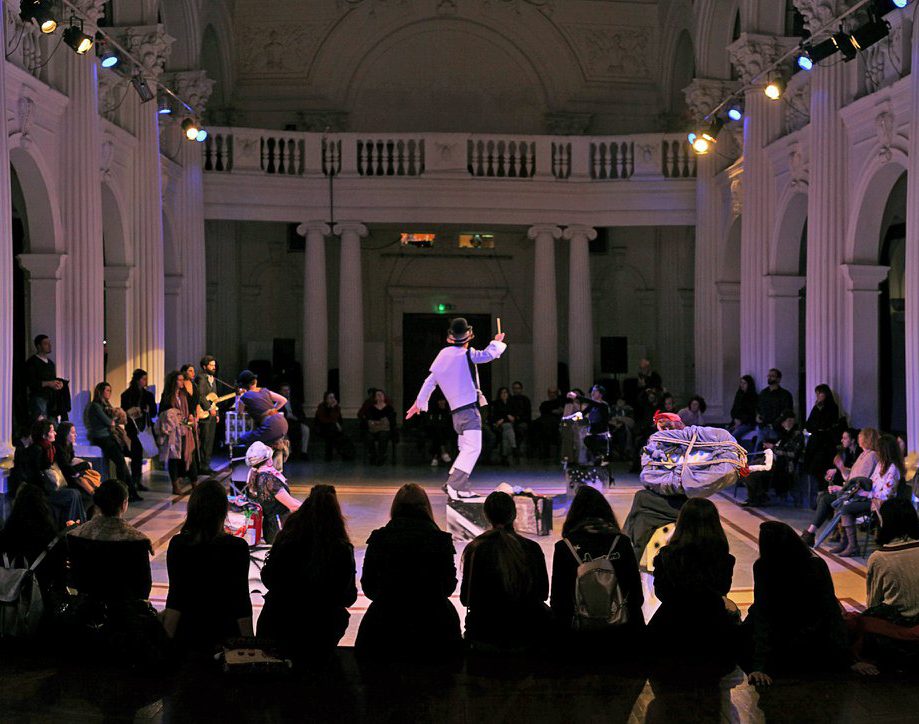